One would usually be inclined to assume that the ‘luxury watch’ is something that is solely derived from one of Europe’s most renowned producers of chic goods. I am of course talking about Switzerland. Whether it be for the watches, the chocolate, the cheese or scenery, Switzerland has certainly made a name for itself not only amongst its European neighbours but globally.

However amid all the talk about the acclaimed and avant-garde Swiss watch, one country in Europe, for decades, has been busy producing two of the most specialist timepiece brands available for the consumer world, Germany!

Since 1845 with the establishment of A. Lange and Söhne and its close competitor Glashütte Original, these german brands have been designed and constructed to meet the same renowned standards and demands as their Swiss counterparts.

Through their aesthetically pleasing nature and technical creditibility both brands have proudly earned their place on the ladder between swiss brands such as Rolex, Omega, and Jaeger LeCoultre to name a few.

A. Lange and Söhne

The first of our German brands comes from a rich vein of history, both inside and outside of horology. Ferdinand A Lange was a young boy at the time he was granted a apprenticship to attend Dresden’s Technical University. Whilst here he was under the wise supervision of master watch maker Johann Christian Friedrich Gutkaes.

The Master and The Apprentice (Gutkaes and Lange) were tasked with building a clock for the Semper Opera House. They responded to this with the 5 Minute clock, an invention that has withstood the test of time since 1830, surviving the destruction and reconstruction of the Opera house on two occasions.

Lange shot to fame when Tsar Alexander II of Russia proclaimed that he used a Lange pocket watch and was astounded by the accuracy and complication of it.

From 1845-51 Lange received praise from the Great exhibition in London, catapulting the business to new heights during the the late 1800’s/ early 1900’s. The brand suffered during the World Wars, as did most, but came back strong in 1990 where the great grandson of Ferdinand A Lange was able to revive the business and the brand we now know a A Lange and Söhne. 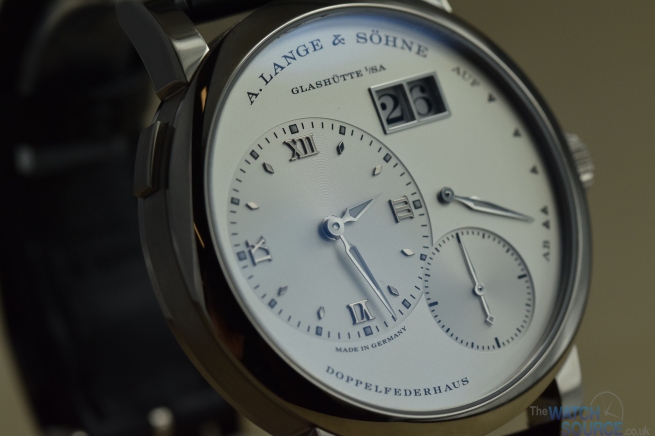 The pictured watch is the A Lange and Söhne Lange 1 38.5 mm wrist watch (191.039). This watch bares testament to the horological capabilities of A Lange and Sohne as it has an in-house 121.1 calibre and beats at 21,600 mph. As can be seen from the impressive transparent sapphire case back, the watch has 368 parts including 43 jewels. The watch also has an impressive estimated power reserve of 72 hours. This power reserve can be sustained using the crown as the watch has a manual wind movement. A power reserve complication on the dial of the watch allows this reserve to be seen by the wearer.

What adds more value to this already luxurious time piece, is the 18kt white gold incorporated to create the clean effect apparent in polished shine of the case. The polished finish on the bezel and lugs builds the character of the watch. White gold hour markers and a date window also achieve the same feat.

Of course all of this doesn’t come cheap. The particular model pictured (191.039) lists at a cool £24,265. Of course to most people that seems like an extortionate amount of money, and it is. But for the eagle eyed watch collector, knowing that you can own a A Lange and  Söhne time piece is far too tempting to dismiss. That collector will feel better still knowing that with The Watch Source you can save up to 12% off the RRP and still have all the necessary paperwork pertaining to the timepiece.

Glashütte Original is the second of our German brands and its name is derived from the village from which it originates. Glashütte has connections with horology all the way back to 1845. At this time it was actually Ferdinand A. Lange who brought watch making to the village, enrolling 15 ore miners as watchmaking apprentices.

Between then and the recognised emergence of the brand in 1994, the Glashütte region has been able to perfect the art of time keeping. This has enabled Glashütte Original to come into its own and provide high quality time pieces that its founders back in Glashütte, (arguably A. Lange himself) would be proud of.

The brand now is part of the elite portfolio of the Swatch Group. Amongst the likes of Breguet, Blancpain and Omega. Being part of this group has enabled Glashütte Original to establish itself as a high quality and accurate brand who’s price tags wouldn’t put off the average wrist watch wearer, but who’s goods can still be viewed as elite collectors items.

Exemplifying this is the Glashütte Original PanoMaticLunar (1-90-02-42-32-05). This model has complications which make it a real collectors item. These features include offset time and seconds clocks,  a large date display and a moon phase indicator.

It operates with a 90-02 Glashütte calibre beating at 28,800 VPH (vibrations per hour). The piece contains 47 jewels and has a power reserve of 42 hours. This power reserve can be sustained due to the winding of the rotor when on the wearers wrist with this watch’s automatic movement.

This watch will set you back £7,430 if purchased at list price. If purchased from The Watch Source then you take advantage of a 17% discount, lowering the price down to £6,166. Whilst the watch is still a significant amount of money, it doesn’t even cost half the amount of its A. Lange ancestor. This model is one of the more expensive ones in the Glashütte range and other products can be found at a much more reasonable price. 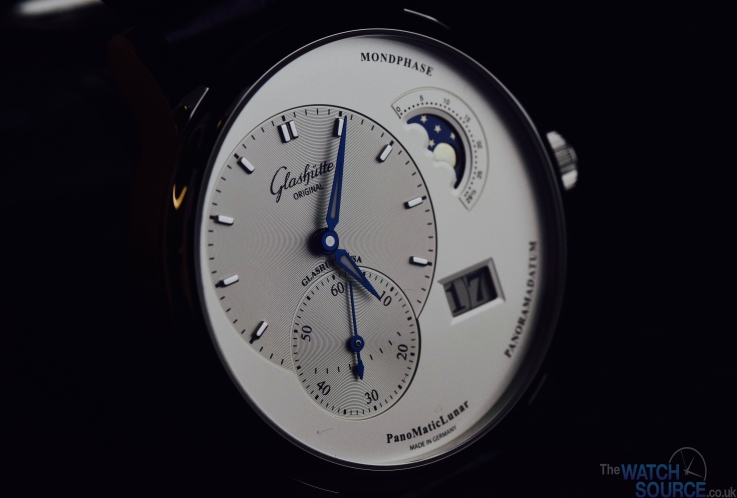 Witnessed over centuries of our worlds history, Germany have always been notorious pioneers in creating technical phenomenons across all industries famously so in motoring. By spreading these skills across a host of fields, in this instance in horology, they’ve certainly proven their capability enough to rival their Swiss counterparts. Whilst Switzerland is the undisputed king of luxury timepieces, anyone that is serious about watches would be foolish to neglect the quality of craftsmanship that the German watch brands offer.