Upon the invention of the wristwatch in the mid 19th century the idea of the watch that we know and love today was very different to say the least. Considered a women’s accessory, known as a ‘wristlet’ and worn almost exclusively by women for nearly 50 years.  At the time, it was the tradition of gentlemen to carry pocket watches for their time keeping purposes.

So what could have initiated the gradual change leading to the wristwatches we know and love today?

Early aviation was the answer, the need for an easily accessible time keeping device held close to the body but that could be monitored while both hands remained at the controls of the aircraft. Crucial for taming the unpredictable aviation contraptions of the early 1900s. It was the Brazilian aviator Alberto Santos-Dumont that first requested a wrist watch for this purpose, inquiring of the Cartier watch company who later developed ‘The Santos wristwatch’ of which he used every time he flew. Dumont’s celebrity status across Europe lead to others copying his style and gradually the wristwatch became a men’s item.

It was the outbreak of war that solidified the use of wristwatches by men. Mostly generals and some soldiers wore them for coordinating strikes and movements. Perhaps most importantly, they become vital to pilots for navigation and timing. Similarly, the precision needed for the strategic bombing raids of the 2nd World War. Leading to famous designs that are homaged, referenced and further developed to this day.

A great example we have in stock here at The Watch Source as a pre-owned model is the IWC XVI Ref: IWC325501

The old method of ‘Dead reckoning’ navigation which lead to terribly poor accuracy of bombing raids had to be retired. Opening the door for the more efficient ‘astro-navigation’. With it, a new timepiece was required, to be operated with the star chart and sextant. The Mark XVIs’ ancestors coming directly from the new 1946 Air Ministry issued specification: ‘G943’. Providing the trained navigators with an appropriate time piece. The IWC Mark II was created and around 8,000 were delivered to the RAF, as well as additional watches to the airforces of commonwealth allies as well as BOAC (British Overseas Airways Corporation) for some of their pilots.

The IWC Mark XVI stays true to many design implements of the original Mark II whilst also taking inspiration from the popular ‘Flieger’ watches of the German Luftwaffe that now characterises pilot watches of the 21st century. Whilst sitting at a conservative 39mm, perfect for day to day usage as well as in cockpit ventures!

It is always interesting to see how a purely functional design has evolved and integrated into the current watch market. It is equally interesting however to see what new & fresh brands have to offer to the world of aviations watches. Chances are if you are reading this blog post you may be older than the brand Bell & Ross. Having only been founded in 1993 by partners Bruno Belamich & Carlos Rosillo, initially producing watches under Sinn before later becoming an independent brand. Despite their relative infancy in comparison to brands also currently producing pilot watches, such as Breguet being over two centuries their senior, they bring a breath of fresh air with their square ‘Cockpit instruments’ collection inspired by the square dials of vintage aircraft. Chunky and well built they are the perfect cockpit companion for many military pilots around the world.

This 42mm BR03-92 Steel is another excellent example we have at The Watch Source ready for immediate delivery. 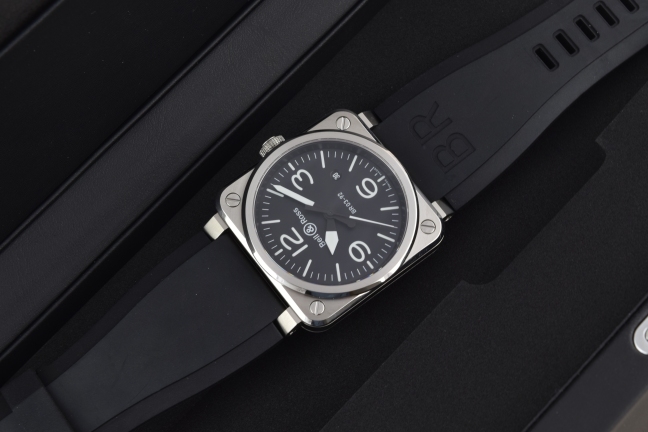 Finally, another example of how the watch industry and watches themselves have developed from the time only instruments of the 1900s to this the Limited edition Oris Big Crown ProPilot Altimeter.

Very clearly a watch with a purpose, the Oris ProPilot Altimeter measuring up at an impressive 47mm is certainly a watch to catch the eye. Dedicated to the famed Swiss ‘Rega’ search & rescue team, bearing their logo at the 9 o’clock position on the dial and a specially engraved case back featuring the Rega’s AW109SP helicopter as well as the limited edition number of 1414 pieces.

Upon unscrewing the 4 o’clock patented ‘ALT SET’ crown a red band is displayed showing the the altimeter and barometer function is activated. With then the yellow hand altimeter gauge on the outer dial ring, measuring on a scale of 0 – 5000 Meters.   While the red hand ambient pressure gauge on the inner/lower dial ring, measures the ambient pressure pressure in hPa (hectopascal) which is metric measurement unit of pressure, commonly used to measure atmospheric pressure. 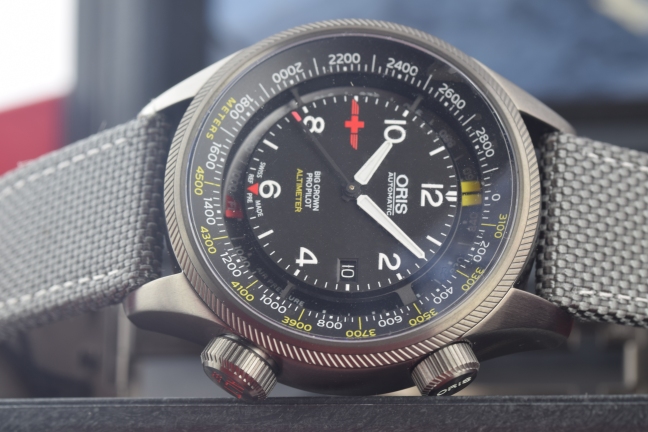 Multiple brands today rely on a back bone of aviation models in their collections, brands like Breitling and IWC find their heritage and the bulk of their collection in aviation. It will certainly be interesting to see as the world of aviation both civilian and military becomes increasingly advanced if or how the Swiss watch industry will keep up. Or perhaps you and I just like the pilots like them the way they are!

You can contact us on our phone number 01442 345261 or email sales@thewatchsource.co.uk with any questions regarding our watches for sale.