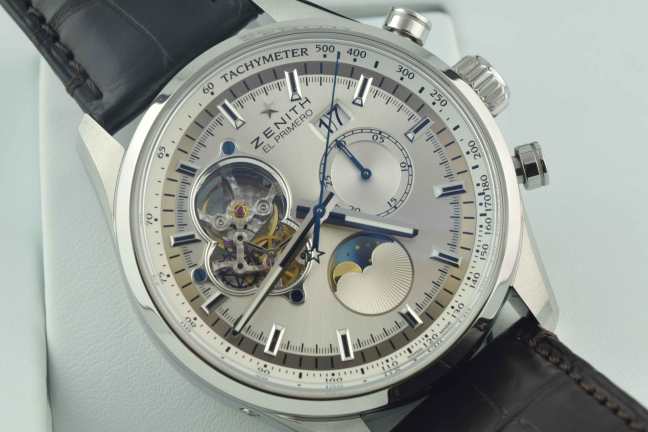 History of the ‘El Primero’

Since 1865, a small Swiss town nestled with the valleys of Neuchatel has been producing on of the most famous movements ever made within the watch industry. At number 34, Rue des Billodes, Le Locle the manufacturer has been working tirelessly  to perfect the art of time keeping to such a level of precision to earn 2,333 chronometry awards during their lifetime.

Zenith’s El Primero movement has provided a concrete foundation on which the brand has been able to build a rich history. The El Primero has the honour of being the most accurate series produced movement in the world. An achievement earned through over 300 years of learning from watch making tradition.

The title of ‘the first automatic chronograph’ is one that is fiercely fought over and has, historically, caused much contention among the watch world. 1969 saw Zenith announce the El Primero in January (didn’t release until October), Seiko release the 6139 movement to the Japanese market in May with Heuer’s calibre 11 being released in August 1969. A calibre which had involvement from brands such as Heuer, Breitling, Buren and Dubois-Depraz.

During 1969, the production of these movements meant that automatic chronographs watches were readily available on the market. Already later than many other brands, Zenith had to differentiate its calibre to stand out. The brand did so in a way which has meant the ‘El Primero’ has out competed and out lived its rivals. The Seiko ‘6139’ was discontinued in 1980 with the Calibre 11 being upgraded to a Calibre 12 within a year due to issues such as an overly strong mainspring and weak rotor.

Zenith adapted their movement but increasing the speed at which it worked at, oscillating at 36,600 bph instead of the usual 18,800 bph which was the norm at the time. To deal with the inevitable increased wear and tear they had to developed special lubricants that stay in the watch longer as well as increasing the power reserve to 50 hours. Increasing speed meant that the Zenith chronograph movements could accurately measure time within 1/10th of a second.

The adjustments earned serious attention within the industry. During the 1980’s Rolex started rolling out production of the 16520 Daytona, a model that used the Zenith El Primero movement as its base. This collaboration made some of the most sought after Daytona models in today’s market,  one is available on our pre-owned website. Other brands such as Panerai, Tag Heuer and Bulgari adopted the movement into their pieces.

Due to the more niche specifications of Zenith watches, production is carried out from start to finish in their factory in Le Locle with all parts being expertly crafted by watchmakers. These unique requirements have given rise to over 600 different movements. According to the El Primero information booklet, making the movement involves:

The 45mm case is cast from stainless steel that has been very finely polished everywhere except the top of the lugs. When light hits the watch it glistens back at the wearer. One can easily be forgiven for thinking that the case is made from something more precious than stainless steel. Brushed lugs provide a comparison that only further enhances the shine of the case. The matte finish doesn’t detract from the luring draw of the high polished fixed bezel, which complements the colouring of the dial and the minute track.

The case features a polished crown engraved with Zenith’s star logo as well as two chronograph pushers. Four screws lock the case back with a sapphire crystal, securing the watch with 50 meter water resistance. On show is the El Primero 4047 movement which powers the watch , more on that later.

Gradients of colour are used on the dial to both complement and contrast. The tachymeter is a subtle white, the dial silvered and the minute track a brighter silver to provide a contrast to the dial. Depending on the viewing angles, hues of green and soft reds can be seen moving round the minute track as the light hits it from different angles.

As well as a big hours, minutes and sweeping second hands, this piece features another 3 complications. The main time is told by the big hour and minute hands secured in the centre of the dial. A blue streak runs halfway down the middle of the polished hands, with the other half filled luminous material. This is the same with the 12 hour indexes.  The steel rimmed, blue screwed opening exposes the escapement and balance wheel pulsing away when the watch is wound giving the dial a raw elegance. The 3 pronged seconds hand is so finely placed in the cutout that it appears to float in the watch case. Elegantly gliding around a semi circular second track, the hands pass over the top of the open escapement and balance wheel as they complete the full circle, to a highly mesmerising effect.

Also secured to the centre of the centre is the blue chronograph hand. Upon depression of the first button the hand will start and stop to accurately measure (the 1/10th of a second) elapsed time. Once stopped, the second button and be pressed to reset the hand back to the 12 O’clock position. Used in conjunction with the tachymeter, the chronograph can be used to ascertain speeds over a predetermined distance. The chronograph minute counter is located at the 3 O’clock position. With the iconic 36,600 bph the chronograph hand dominantly sweeps the dial, every second counted as smoothly and as accurately as is to be expected from a movement of this calibre.

Next to the 2 O’clock index is the ‘grande date’. This complication is crafted using a patented 3 disc system, providing easy changing of the date once the crown is fully pulled out. Having the numbers on individual discs increase legibility without impeding on the dial.

Located at 6 O’Clock you’ll find a duel purpose moonphase complication. Pressing the pusher by the 8 hour index aligns the golden moon along its 28 cycle to correspond with lunar calendar. Every day that passes, the moon will shift further along to replicate the shape of the moon in the sky. Behind the moon is another phase disc. Rotating once every 24 hours, the AM/PM discs shows a bright orange sun on a sky blue background and also golden stars on a deep blue background. As the hour hands move round the face of the watch, the discs shifts hour by hour. This constant change of the background to the moonphase provides and endearing charm to the complication and provides a welcome splash of colour amongst the silvered dial.

Securely in place in between the brushed lugs, Zenith has attached a brown alligator strap. 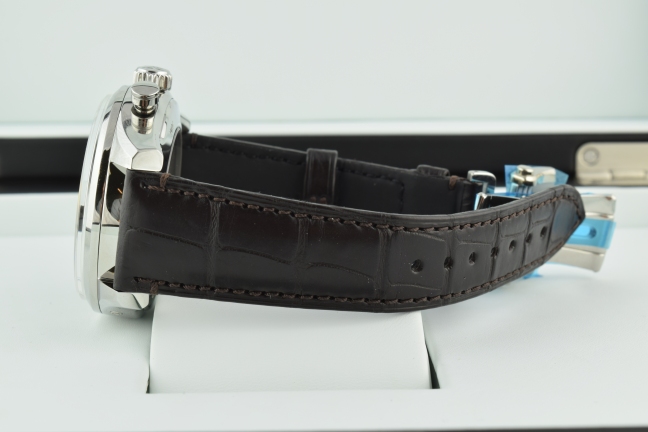 On the inside of strap is a very fine layer of rubber which adds an extra level of comfort. Bearing in mind the rubber/leather combination, even when new, the leather is very supply and very comfortable to wear and flexibly moves around the wrist. 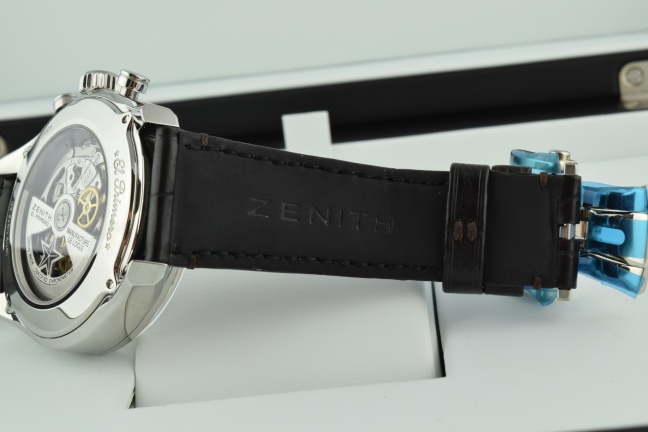 Seven holes are perforated into the bottom half of the strap which can be threaded through using the tang and deployant style buckle. With the tang style fastening the watch can be easily and quickly adjusted to size.

Named after the legendary movement, this piece runs on a Zenith El Primero Calibre 4047. As is standard in the El Primero movements, and output of 36,600 vph is given by the 4047, a key factor in the accurate measure of time to 1/10th of a second and the smoother chronograph function. The movement is finished with 32 jewels to help reduce the wear and tear in the watch. 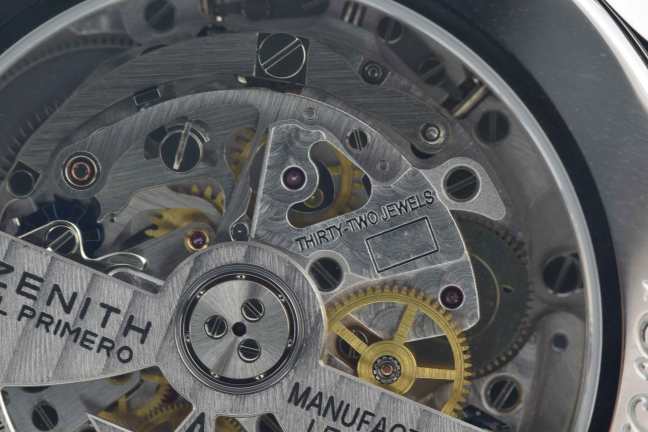 When fully wound this movement will keep going for approximately 50 hours and is made up of 332 components. Inspecting the movement through the cut out on the dial the balance wheel can be seen powering the pallet fork escapement, finished with a purple colour with the Zenith star cut into it. Inverting the watch shows the whole movement in all it’s glory.

When the first chronograph button is pushed, a lever can be seen pulling on the dark blue column wheel to lower the movement into place. The weighted half rotor can be seen spinning round winding the watch in a bi-directional manner. Proudly printed on the rotor is the certification of chronometery, an achievement that makes this iconic movement not only historic but immensely reliable and accurate to wear and use.

Zenith’s long history of producing exceptional movements is something that is continued in this piece. Not only does it suit the watch enthusiast who can brag about owning a watch containing an El Primero movement, but it also appeals to the average less educated watch wearer. With its appealing complications and balance wheel/escapement cutout it provides a spectacle which never gets old for the wearer to see not matter how many times the time is checked. Checking in at just under £8,000 this piece is not cheap and other Zenith El Primero chronographs are available at significantly cheaper prices. With this model being the cheapest moonphase model that Zenith do going for a cheaper model will inevitably simplify the watch. Other brands are able to produce cheaper moonphase, chronograph movements (304.33.44.52.03.001 being the cheapest at £6,768). This Omega shows that buying a watch with similar complications, time keeping ability and materials used can be done cheaper, but Zenith has one thing over all of them which collectors often favour. History. Rich history which extends back all the way from 1969. Rich history of producing world firsts and most importantly, a rich history of manufacturing the El Primero.

This watch is available to purchase from our store: 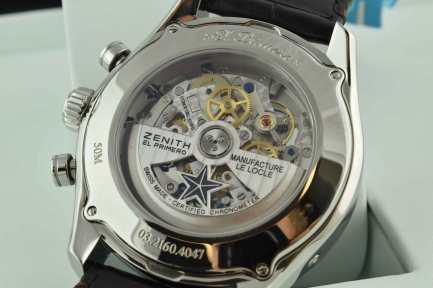 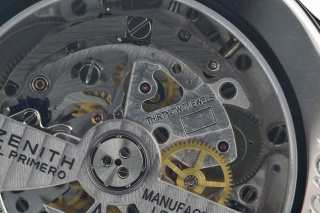