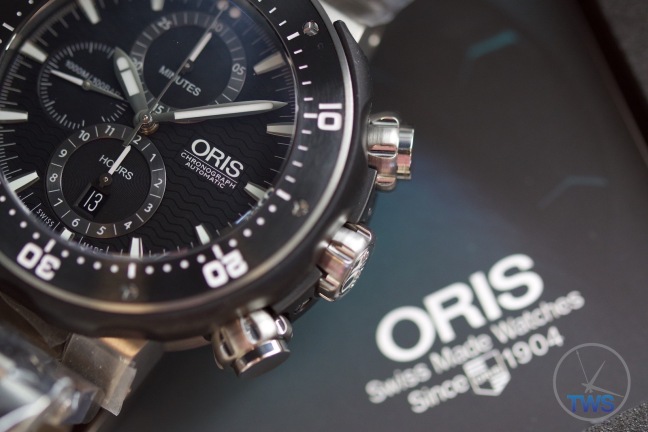 There’s simply no way around the fact that this watch is gigantic. The ProDiver has a huge 51mm case diameter and is nearly 2cm thick – definitely not something that will fit under a shirt cuff. This watch is so large that even the big Rolex Deepsea (ref. 116660) starts to appear small when sat next to the ProDiver. Although the ProDiver is only just water-resistant to a mere 1000m with the Deepsea enduring the far more sensible and useful depth of 3900m, I think the ProDiver would be sufficient for the 99.9% of divers. 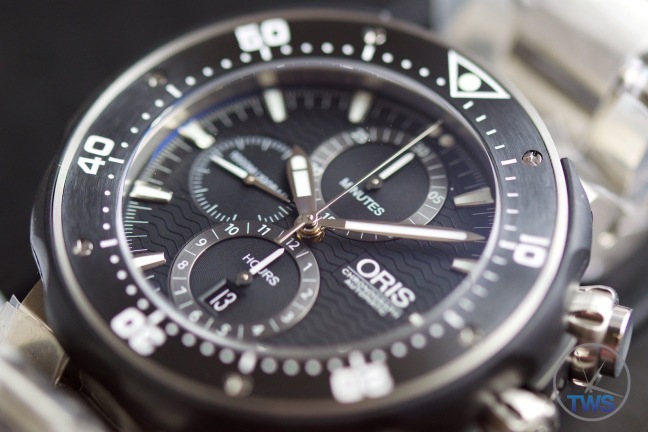 Oris have avoided packing the watch in a leather box and have instead paired the ProDiver with a rather nice Pelican like waterproof box that would by its self, retail for about £175. And inside some thoughtfully added professional tools to help you change or adjust the bracelet and an additional black rubber strap.

The watch casing and strap are entirely constructed out of brushed titanium with a slightly two-tone effect on the three links wide bracelet. With an appropriately sized inter-lug width of 26mm to match the dials huge proportions. I was somewhat disappointed to discover that the clasp mechanism on the strap is of the push-button variety, and without an additional safety. Not entirely inspiring confidence for everyone wanting to go diving with this watch on. But by no means a deal breaker for divers and non-divers alike.

The lugs on the Oris ProDiver Chronograph are heavily curved to help the watch hug the wrist of the wearer and be as comfortable as possible. The casing is of a beefy construction and would be ill-suited to anyone with a wrist diameter smaller than the total width of the watch including lugs. So the wearer’s wrist diameter should be greater than the 5cm width of the ProDiver for it to look good. The back of the Oris features a solid case back with Oris signatures and a useful conversion table to convert meters into feet. 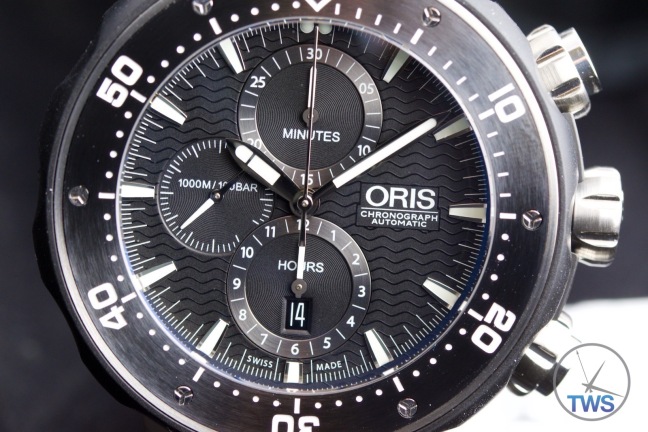 The stainless steel pusher buttons that operate the chronograph complication on the side of the watch are sat low down on the casing as to not catch on clothing; sitting by the 2 and 4-hour markers, and screw down to protect the internals from water damage when under high levels of pressure. The screw down crown is made in a similar style with flanged slits added, to assist in gripping and turning the crown. The ProDiver also features an automatic Helium Escape Valve.

On the front of the watch sits a revolutionary new type of bezel designed by Oris dubbed the ‘Rotation Safety System’. That is a continuation of the unidirectional bezel in terms of security advancements. In addition to it only turning one way this rubber ring is required to be pulled up to adjust the bezels position, stopping it from accidentally being advanced forward. This rubber ring also acts as a grip on the bezel to make it easier to turn, and as a bumper to protect the bulbous metal case from the expected bumps it will inevitably receive. The bezel is made from a black ceramic and has some highly legible white Arabic numerals applied to it. 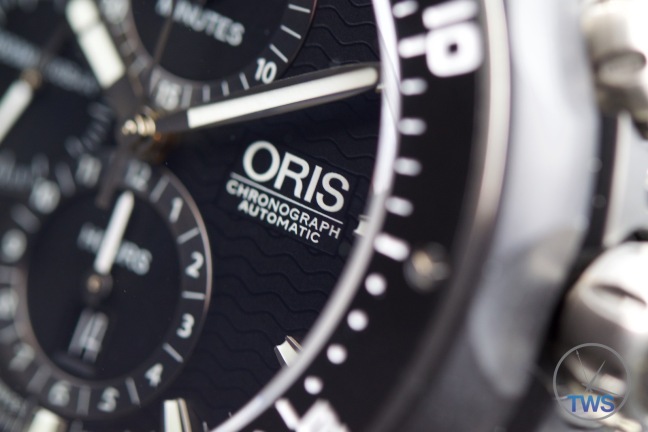 Above the dial sits a sapphire crystal being domed on both sides to give the additional strength required when diving to a kilometre underwater. Which would equate to over 2,040kg of water pressure pushing down on the 51mm diameter watch face. This is the equivalent of an adult male black rhinoceros balancing on the ProDiver’s watch – and it ending up unbroken. For reference, the smaller 3 times as expensive Rolex Deepsea, has a statistical load resistance of 3.1 tonnes at a depth of 3,900m, and the experimental Rolex Deepsea Challenge an astounding 13.6 tonnes of theoretical load resistance (12,000m under water). Which to continue the rhino analogy, the Rolex challenger could survive an entire family of 7 or 8 adult rhinos stacked on top of each other.

The sapphire crystal on the Oris ProDiver also has anti-reflective coatings to increase dial legibility in situations with glaring lights. The dial is black with a horizontal wave pattern giving some much-needed texture to a rather elegantly designed watch dial. Each time indicating hand and indices have Superluminova variant BG W9 luminescent fill for legible time-keeping in low light environments. The BG W9 luminescent is the second brightest Superluminova available and is the brightest that looks white in daylight, with the brighter C3 version often appearing an off-white green colour which some people dislike.

The chronograph compilation consists of three sub-dials for 30 minutes, continuous seconds, and a 12-hour counter by the 12, 9 and 6-hour marks respectively. Inside the hour counter at the bottom of the dial, is the date window that doesn’t draw attention to its self and melts away into the dial nicely.

The Oris ProDiver Chronograph is a super tough tank of a watch that requires a large wrist for it to look good . Its water-resistance is extremely unlikely to be tested anywhere near its rated 1000m of water depth. And offers good dial legibility thanks to its Superluminova BG w9 luminescent fill. It’s a solid casual watch that will put up with a high amount of abuse and still tell you the time at the end of it.

The OrisPro Diver Chronograph watch can be bought from our shop at a discounted price from here. 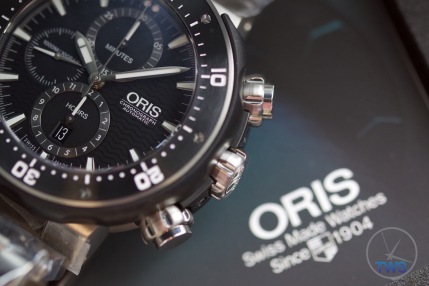 Side view of Oris ProDiver Chronograph.